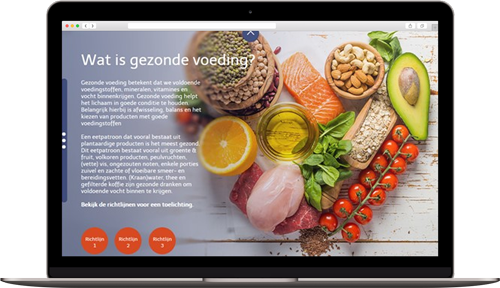 PlusPort develops various types of e-learning modules for every desired theme, from introduction or onboarding programs to application training, from safety training to product training, regardless of the form or concept. Think of simple quick short modules with a key to a large game or a small micro-learning. Clients choose PlusPort because we want to be able to fill in your training needs flexibly, quickly and at relatively low costs. PlusPort has an enormous library of images, developed standard exercises, navigation buttons, menus and illustrations that were or are used for PlusPort’s e-learning modules.

Currently, Virtual Reality is also used for behavior and awareness. Since the emergence of VR, much attention has been paid to the application of VR in the training industry, because VR can provide a unique user experience.

VR is often used as a container term. You can roughly distinguish between 3D-drawn environments (such as in games), 360-degree recordings (with videos or photos) and Augmented Reality (posting virtual information about reality). We are currently focusing primarily on applying 360-degree shots because it is the most accessible.

The developments are rapid but at the same time the application of VR also raises questions. What can you actually do with VR? What does it take to develop VR? How can you apply VR in training? To gain experience with VR, we have therefore developed a number of VR training courses in collaboration with our customers, including one for Aviko and one for Haag Wonen.